This screenshot shows spiraling echoes inside and outside the feather.
The outside echo lines are not evenly spaced. I changed the gap progress on the echo pattern page to create this effect.  Gap progress is a percentage. Set at 25%, for instance, each gap between the echo lines will get 25% larger.  Touch the +/- button to make each gap 25% smaller.

I chose spiral for my outside echoes and adjusted the start point to a more pleasing position by dragging it on the screen. Touching finished returned me to the echo pattern page.

I touched the inside of the feather to place echoes there and made changes to the number of repeats, gap, and gap progress.
This was the last set of echoes I wanted so I touched finished and chose spiral as the transition. The spiral looks a bit odd (look on the left hand side for sharp transitions between the starts and ends), so I moved the start/end points to smooth the lines as much as possible.

They couldn’t be completely smoothed to my liking, so I chose smooth pattern after finishing on the echo pattern page and cleaned up the spiral. 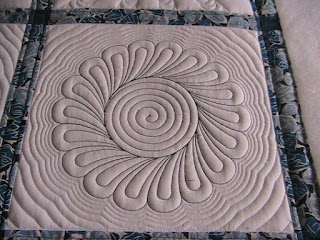