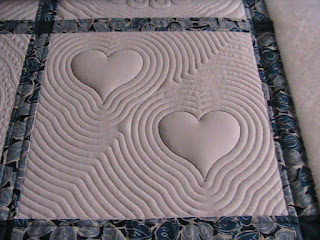 It is possible to echo multiple patterns. When you get to the screen where you are asked to select the patterns to echo, touch as many as necessary. In the photo above, I touched both the hearts. I set the number of repeats, gap, and other settings to my liking and iQ filled the background with echoes.
In some instances there may be spaces left between the patterns that are larger than you'd like, so try altering the gap until you get a satisfactory result.

This image shows multiple motifs echoed. The block has not been defined as a clipping block. This type of echoing could be used in a border. When the choice of which pattern to echo has to be made, touch all the motifs you want to echo.