ECHOES.
It is possible to echo both inside and outside spaces of a pattern, and to echo multiple patterns. iQ stitches echoes beautifully. They stitch out relatively fast and look very impressive. Each pattern to be echoed on a quilt, even if they seem identical, will need to be set up with echoes individually. This does take extra time so adjust your fee accordingly, if the quilt is for a customer.

These are the steps for creating the echoes in this illustration, starting after the motif is in place.
Add pattern > echo pattern > touch the motif > continue.
I wanted the echoes outside my motif so I touched that space.

There are several choices to make on this page. Notice IQ always starts with 10 repeats, a gap of .25” and smoothing at 25% as the default. All these can be changed to suit the project. 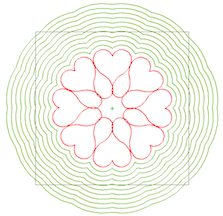 I changed the gap to make the distance between the echoes larger. I changed the number of repeats so that they filled my block. Of course, some of the lines extended outside the block. I changed the smooth to 0% because I wanted the echoes to mimic the motif as closely as possible.
I did not alter gap progress or points.
Finished. (I would have selected Accept here if I had wanted to return and add more echoes to other areas of the pattern.) 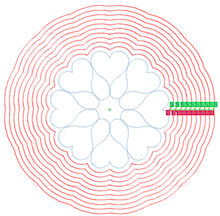 Now I had to choose whether to keep all the echo lines as separate patterns or combine them together.  The advantage to combining the echo lines comes when the stitching sequence is set up. If I kept the echoes separate by choosing the transition: none, then I’d have to touch each echo line when sequencing.  Combining the echoes, allows me to just touch the echoes once because IQ will see them all as one pattern.
I chose jumpstitch as the transition by touching transition then the + sign to change the option.
I did not change the sequence – I kept it at consecutive.
Finished.

My next step created a clipping block to get rid of the extra lines that extend outside the block.
Add/edit block > add block > clipping block > I touched the echoes > continue > select existing block > I touched the square block > continue
The next page showed the echoes clipped, as I wanted them so I touched finished which led me to another clipping confirmation page. I chose jumpstitch because I wanted to do some editing of the stitching path in order to reduce the number of times IQ would move around the block.  The echo lines are circular so where they are clipped, IQ would stitch one short section, move to the next corner to stitch the next short section and so on, time after time for each clipped echo. This would create a huge build up of thread along the edge of the block. I want the stitching to be more continuous. Choosing jumpstitch here allows me to split more easily. 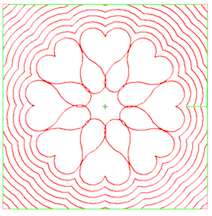 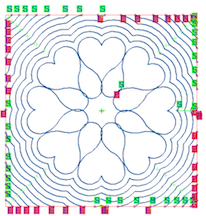 My next step was to combine each set of short echo lines in the corners together. I selected Combine Pattern then thought about how I wanted these echoes to stitch and touched each in turn in the order that they'd stitch out.
(Shirley Higginbotham has a video, titled spiral echo, showing this process)
In the screenshot at the start of this section, you can see a long blue line going from the last full echo to one of the corners. This indicates a tie off. After combining the short corner echoes into patterns, I then combined all the echoes together again, choosing tie off as the transition