This type of echoing looks most effective when the shape to be echoed is not too complicated. A smooth shape works the best. It does take more time to set up and stitch out but looks wonderful. 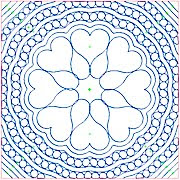 To create these filled echoes, I first set my pattern in the block then chose Add Pattern > Echo Pattern  and touched the pattern I wanted to echo. Continue.
I set my initial number of echoes to fill the block (in this example , that was about 13) with a .25 gap. I set the smooth to 25% because I was going to use every other echo as a path so making them smooth allowed the path pattern to follow them more pleasingly. Gap progress :0% and Points: rounded. Finished.
This time I set the transition to none.
Add/Edit Block > Add Block > Clipping Block.
I touched all the echoes that extended beyond the block and selected jumpstitch as the transition. 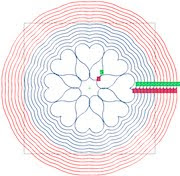 Before adding the fill, I needed to split all the patterns that were linked with jumpstitch lines.
Add/edit pattern > split pattern. I touched all the green jumpstitch lines around the edge of the block until there were none remaining. You can touch anywhere along a jumpstitch to split it, then it will simply disappear. 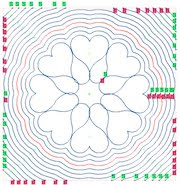 Add/Edit Pattern > Add Pattern > Path Pattern. I touched the first echo line that I wanted to turn into a fill. (In the screenshot above, you can see the line I chose because it's red.) I chose pearls to follow the path and increased the number of repeats until they filled the space between the adjacent echo lines. Notice how the pearls are a little distorted, if I wanted them to be more rounded, I would have to make the echoes smoother at the initial set up. 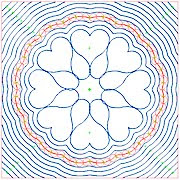 I repeated those steps until I had all the filled echoes in place.

Next I deleted all the echoes that I had used as paths. Zooming in really helps here.
Finally, I needed to do some clipping so I touched Finished > Add/Edit Block > Add Block > Clipping Block.
I touched Select All > Continue > Select Existing Block, and touched the square > Finished. I chose continuous as the transition because I'm only clipping the pearls at this stage so the continuous transition at the edge of the block would be very small..
This leaves the clipped pearls flattened at the edges, as can be seen in the image at the beginning of this section. If that’s not acceptable, use either shape shift or smooth to round them out.

When setting up the stitching sequence, you will have to tell iQ to stitch each echo and fill in turn. This allows you to customise the order in which they stitch out.