This is a training video covering the parts of the iQ system, care of the system and all the basics from pattern manipulation to design. The video uses the ClassiQ T550 tablet in demo mode, but can be helpful to anyone. This is a very long video but it has a time index at the start so you can jump to a relevant section.

Thank you, Erin for making this video.

Note: If you are unable to see the full width of the video here, please watch it on youtube at this link

In this video, Angela Huffman shows how she sets up and saves a master panto layout. This method can be a great time saver if you stitch a lot of pantos on quilts always at the same size, just as you did with paper pantos before adding iQ.
This video was made in 2011 and while the method is still relevant, some of the pages may be slightly different.

Erin demonstrates the steps to create a no-sew zone in this video. She is working in demo mode. 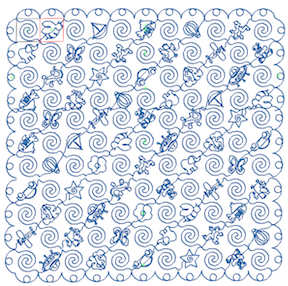 Re-starting a pantograph after shutting down iQ.

Here I'm showing how to re-start a panto after shutting down. The key is to answer yes to the question,"Do you want to save the needle position?" when you shut down. This is so helpful for any type of quilting, edge to edge or custom, when you need to find where you were before you shut down.
If you have to shut down mid-way through a row, save the needle position where you stopped and you'll see that place when you start up the next day. The target will be exactly where you stopped so you can do the initial alignment to that place. When you get to the sew quilt page, iQ will go right to that place to start stitching.
In the video my machine moved to the right instead of to the left for the start of row 3 because it was moving to the saved position of the needle, which was at the end of row 2. I had set up all the rows of this pantograph with stop to cut threads as the transition so iQ wanted to get back to the saved needle position so I could cut the threads. Ofcourse, I didn't need to do that.

This feature allows you to see exactly how the motors are moving your machine as it stitches.  It is a great tool to use when you see a poor stitch out. Turn on this feature and watch the trace. If the trace line doesn't match the pattern on the screen, the speed and details probably need reducing. However, if doing so doesn't improve the trace, then the motors themselves should be checked. Look at the sensor wheels first to make sure they are running in the correct position. If they have o ring's, check for cracks.
NOTE: IGNORE THE START OF THIS VIDEO - WE NO LONGER NEED TO TURN ON THE TRACE IN PREFERENCES.

In this video I show the effect that dwell has upon the stitching. The dwell button is found in the ribbon on the sew quilt page. Turning dwell on makes the machine pause momentarily at the dwell points of a pattern. It can give greater definition to a design. However, if you are having trouble with thread breakage, turn dwell off.

In this video I (Helen) am working on a Milky Way quilt. I wanted to custom quilt it so decided to create and use a line pattern to make the custom quilting as simple as possible.  Instead of stitching individual motifs in each pinwheel/star with many starts and stops, the line pattern stitches continuously making just one start and stop per row.  I decided I needed to add stitch in the ditch, which I did manually.  I talk a little about how I created the pattern I use, show how to restart after a thread break and how I compensated for fabric draw up.

A quick video showing how to load images onto iQ for picture pattern.
The pictures you load should be either .jpg or .png
I do not demonstrate the different modes of pattern generation. There are many variables so a take a few minutes to explore all the modes. The release notes for software version 12.10.13 have some very clear illustrations showing the different modes. Further changes can be made by altering other options on that page.

This video shows how to use the distance from needle button when adjusting a pattern. It allows a panto to be sized accurately to fit in the remaining space on a quilt without having to cut the threads and move the machine.
When I am adjusting the dashed right hand edge, ofcourse, I could have simply dragged the dashed line into position but using the keypad is much faster and more accurate.