10.  The final 2 borders and the border cornerstones.

The quilt has been turned so that the final two borders can be stitched.  This makes it easy to adjust the full length of the pattern and stitch it in just two parts.
Having turned the quilt, it’s then necessary to turn the image on the screen. This project was a square quilt so it wasn’t really necessary to turn the image – if it had been rectangular it would have had to be turned. Whether it’s turned clockwise or counter clockwise is up to you. Pay attention to the way you turn the quilt on the frame and turn the image the same way. This is a good habit to get into for those times when a quilt isn’t symmetrical, for instance when it may have piecing on one end of a border.

Align the quilt map off to the side.
In the video I mark on quilt the top border with diagonals at the corners. Don’t do this – follow the better method below.
The video does not show the pattern being stitched although I do talk about the different ways to sequence the patterns. Upon stitching I discovered that my quilt moved quite a lot so that made me think of a better way to both mark my blocks and how to sequence the stitching. Follow this new method instead of the way I do it in the video.

Here is the completed block.
Copy the feather patterns from the map and move them to the new block.
Modify them as necessary, just as I did in the video. Match the center of the feather pattern to the center of the block and then move it down into position. Zoom in to check the distance between the seam line and the pattern.
Look at each end. Make the pattern to be stitched meet up with the marked end of the borders.
Change the width then use stretch, as shown in the video.
Here are my screenshots of the pattern in the new block, before and after modification.
The left hand end needed more modification than the right hand end. I changed the width then selected the left hand feather and used stretch to match it to the previous stitching. The distance was too great between the border and the pattern so I used shape shift to bring that portion down.

I only needed to use stretch at the right hand end after altering the width..

Here is the whole border.
In the video you’ll see I have trouble using the measure tool. Since I was working at an angle, it was hard to see exactly where I was touching the screen and I didn’t get it right. When standing in front of the screen, I touch slightly above the measure tool’s end crosshairs in order to drag them to the places I want to measure. (I did do this successfully in an earlier video)

Sequence the feathers. After stitching one half of the feather pattern, align to the center (as done in the first video about stitching the top border) then move the needle to the stitched side, placing it over the stitching where it needs to match the yet to be quilted pattern. Set zoom to true size and look up at the screen to see if it is where it should be. (I do this in the video when modifying the pattern) If there is a big difference, back out to the modify pattern page and alter the pattern. If there’s only a tiny difference, be prepared to move the fabric slightly as the stitching approaches the end, Remember, the fabric will draw up.
Stitch the second half of the border pattern.

After stitching the feathers, back out to add/edit pattern > delete pattern > touch the feathers that have been stitched to get rid of them.
Finished > add/edit block > delete block > touch the border block > finished.
Add/edit block > add block > standard block > mark on quilt. Mark along the stitching and the outside edges of the corner.
Add/edit pattern > copy pattern > move the heart into position. Refer back to your quilt map to see the way you originally placed the heart so you can match that on the real quilt.

This screenshot shows my marked corner block.  You can see how many points I marked along the stitching – each small green square is where I clicked to mark the block. (That green vertical line is part of one of my needle crosshairs) 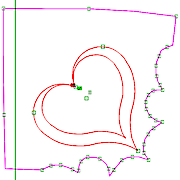 Stitch the heart.
Back out and mark the other corner block, move the heart pattern and stitch it.

Advance your quilt and mark and stitch the bottom border in the same way.

Here is the video. Ofcourse, it's the last part of the project - not what I say in the video!